From the publishers of JADPRO

The patient, a 28-year-old male with severe hemophilia A, presents with numbness over several fingers of his left hand, including complete numbness of his left index finger, and bruising of the left palm (see Figure below). 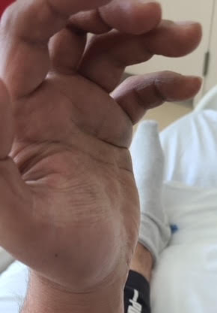 Figure. The patient, a 28-year-old male with a history of hemophilia A and inhibitors, initially presented to the emergency department of his local hospital following symptoms related to recent injury of his left hand and was hospitalized due to compartment syndrome. (A) Patient’s hand has no range of motion, secondary to swelling and nerve compression from uncontrolled bleeding. (B) Hand shows palmar swelling secondary to a muscle and soft tissue bleed.

His pertinent recent medical history includes a left hand bleed with nerve involvement and compartment syndrome: On April 6, he had injured his left hand when a table fell on it. Previously, on March 26, 2021, he went to the emergency department (ED) of his local hospital for a left hand bleed that started the same day. He was not treated with factor during his initial presentation to the ED on March 26 but received 1 dose of NovoSeven ([rFVIIa] recombinant activated factor VII) at 10 mg that day. On March 27 he received 1 dose of NovoSeven. On March 28, he received 3 doses of NovoSeven at 5 mg every 8 hours but was not treated with factor. On March 29, he received 1 more dose of NovoSeven at 5 mg. NovoSeven is typically administered at a dose ranging from 90 µg/kg to 270 µg/kg every 2 hours, depending on the severity of bleeding.

The patient was discharged from his local hospital in April 2021, after he declined surgery. At home he received FEIBA q 12 hours for 3 days. His IV line was out on April 5 and he was able to infuse with 1 dose of FEIBA. (FEIBA [factor eight inhibitor bypass activity] is an anti-inhibitor coagulant complex indicated for use in hemophilia A and B patients with inhibitors for control and prevention of bleeding episodes.) No infusions were given. The swelling of the patient’s left hand had improved markedly but there was residual swelling and numbness of his thumb, index finger, and middle finger, with complete numbness of the lateral and medial aspects of the index finger and middle finger.

This patient’s disease and treatment history is significant for severe hemophilia A, diagnosed in infancy, at which time a port was placed and he experienced significant bleeding and superior vena cava (SVC) syndrome. As a child he was transferred to a specialty hospital, where he received care until early adulthood but was then lost to follow-up due to insurance issues. Since leaving specialty care, his treatment has been fragmented and his bleeding episodes have often not been treated. His history includes multiple admissions, usually at a local community hospital.

The patient has developed inhibitors against factor VIII, and previous immune tolerance induction (ITI) therapy to eradicate the inhibitors was unsuccessful. He has bilateral joint arthropathy of the ankles, knees, and elbows.

Bleeding episodes in the 6 months prior to referral of the patient to specialty care include the aforementioned bleeding in his left hand in March, bleeding in the right knee in February, a right calf bleed in November 2020, and separate incidents of a finger bleed and left elbow bleed in October 2020.

The patient is alert with no fatigue; no weakness; no weight loss; vital signs within normal limits; a BMI of 25.74 kg/m2; and no significant symptoms/signs related to major organ systems, except for the numbness over his left thumb, index finger, and middle finger. His left hand shows bruising of the palm, slight swelling, and decreased range of motion. There is otherwise no bruising, bleeding, or pallor.

The specialty center’s multidisciplinary team had a lengthy discussion with the patient regarding his diagnosis—with an emphasis on signs & symptoms of bleeding vs arthritis, given his joint arthropathy—and appropriate treatment.

At the specialty center, the patient received 5,500 units of FEIBA PRN to control his bleeding. FEIBA may be infused every 12 hours but advice should be sought from a designated hemostasis and thrombosis treatment center (HTC) regarding prolonged use. This patient was instructed to continue to infuse FEIBA at home at a dosage of 5,500 units every 12 hours for 3 more days, then daily until his follow-up visit to the specialty center the following week.

Other medications included in the patient’s treatment plan are NovoSeven at 7 mg IV every 2 to 6 hours, depending on the severity of bleeding; Amicar (epsilon aminocaproic acid, an antifibrinolytic agent) at 3 g PO QID PRN, to protect against oral mucosal bleeding; and
Meloxicam (an oral nonsteroidal anti-inflammatory drug) at 15 mg per day, to relieve his symptoms of osteoarthritis.

An extensive evaluation was conducted to develop plans for this patient’s physical therapy and occupational therapy (OT). He was scheduled for OT evaluation and therapy once weekly for 6 weeks. He was also evaluated by a social worker on the healthcare team.

The patient was encouraged to participate in the FRONTIER1 trial (A Research Study Investigating Mim8 in People With Haemophilia A; ClinicalTrials.gov Identifier: NCT04204408) and signed an informed consent form for enrollment.

A multidisciplinary care conference was held that included the patient, a physician, a nurse practitioner, a physical therapist, and a social worker. The patient’s healthcare team discussed the possibility of home nursing support, and the patient was requested to return to clinic in 1 week.

This case highlights the need for patients with rare bleeding disorders to be followed by a multidisciplinary team of care providers at centers with specialty programs, to meet their need for expert care. This young man had been lost to follow-up due to health insurance issues (lapses/gaps in coverage). He had only recently re-established care with a designated HTC. When he first presented with a serious bleed into his left hand, he was admitted to a hospital that did not have a bleeding disorder specialist. He was undertreated for a significant bleed and offered surgery. The providers at this outside institution did not seek advice from bleeding specialists initially; it was the patient who reached out to the HTC providers.

The patient continues to have nerve damage, which is slowly improving. However, his insurance coverage has been somewhat prohibitive in terms of approving access to care from other specialists—such as a hand specialist, neurology/orthopedic specialist, and outpatient occupational therapists.

For healthcare professionals seeking further information, the Centers for Disease Control and Prevention provides a useful Hemophilia Treatment Centers Directory on its website, as well as other excellent resources for healthcare providers and their patients with hemophilia and other bleeding disorders.